Charlie Walden has for many years been a tireless advocate for the preservation of old-time fiddling in Missouri as co-founder of the Missouri State Old Time Fiddlers Association; organizer of fiddle contests and conventions; producer of records, radio shows, and fiddle programs; and author of numerous articles on fiddling. Active as both a dance and contest fiddler, Charlie has been state champion in Missouri and Illinois, won the West Virginia State Folk Festival fiddle contest in 1994, and was a featured performer on the 1994/95 Masters of the Folk Violin West Coast tour. 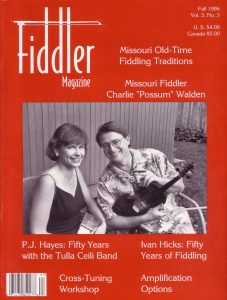 Charlie began playing the violin at age fourteen in Hallsville, Missouri, near Columbia. Coming from a non-musical family, he played the tuba in the school band and started learning the violin when an unwanted fiddle ended up in his possession. Living close to the University of Missouri in Columbia, with its active music community, Charlie was soon a part of the old-time music scene. Before long, he was learning from some of Missouri’s greatest fiddlers, Taylor McBaine, Pete McMahan, and Cyril Stinnett among others. Another major influence was the tune historian R. P. Christeson, who instilled in Charlie an enduring interest and respect for the varied fiddle styles in the region, particularly the older styles of playing. This interview took place in May 1996.